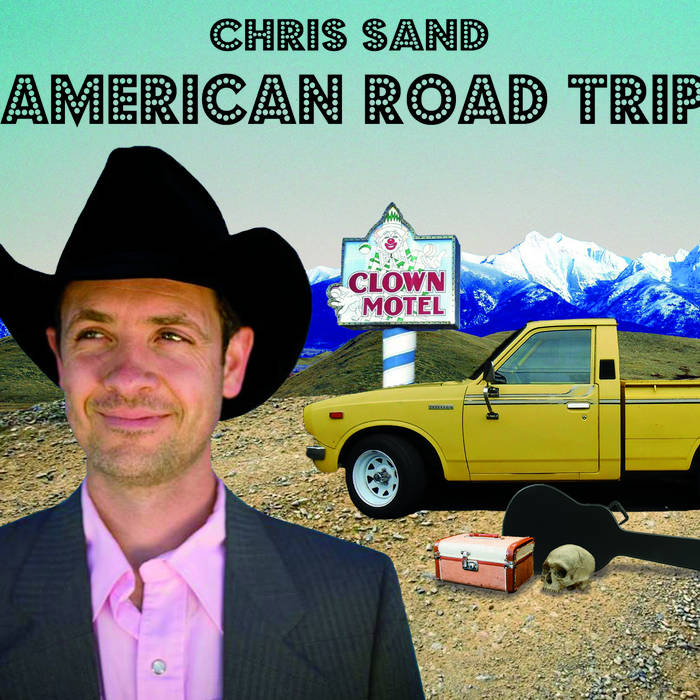 Chris Sand (formerly Sandman The Rappin’ Cowboy) has traversed the blue highways and gravel backroads of the USA for over two decades, performing his unique blend of folk, punk, hip hop, and cowboy music in basements, living rooms, barns, performance halls, and dive bars along the way. Dubbed by Punk Planet in 2003 as “our Troubadour for the 21st Century,” Sand continues his ride in American Road Trip, his 13th official release.

On what is arguably the choicest radio cut,“Bull,” Sand channels Johnny Cash. The song roasts a former truck-driving employer with a galloping country rap: “He don’t like unions and he don’t like feds / If you slack on your job, Old Boy sees red / He’s bull, he’s a bull / He’s got horns in the sides of his skull…”

The album's penultimate track is Sand's recitation of Bruce Kiskaddon's masterful 1924 poem, “When They’ve Finished Shipping Cattle In The Fall.” Over a moody electronic breakbeat that evokes cracked badlands and sunsets glinting off interstate asphalt, Sand is at his best--sincere and true in voice and tone, his loneliness upfront and undisguised.

On American Road Trip, two decades of touring — as rapper, jester, social activist, truck driver, country singer, documentary subject*, and lonesome lover—crystallize into a lyrical scrapbook of life lived in the flow of creativity under the great shadow of American discontent. Across frozen ground and disappearing daylight, Sand’s humor, hope, and grit abide.

As No Depression’s Grant Alden wrote in 1998 “...[Sand’s] songs arise from the same dusty world Woody Guthrie wrote about without being mired in the dust of Guthrie's tradition." Fresh and free-spirited, American Road Trip is one heckuva ride.

7. Chair of the Month
(words & guitar - chris sand. bird sounds collected by nima samimi in new orleans.)
I am the king.  I'm the king of the punks.

12. When They've Finished Shipping Cattle in the Fall
(written by bruce kiskaddon.  produced by timezone lafontaine)
Yet nobody seems to have a lot to say.

Song 2 produced by Karel Hastings in Indiana, PA.
Songs 3, 9 & 12 produced by Timezone LaFontaine in Olympia, WA.
Songs 5 & 13 produced by Travis Yost in Missoula, MT.
Songs 6 & 8 (and part of 11) produced by Corwin Fox at Hidden Well in Cumberland, BC.

AMERICAN ROAD TRIP was mixed and mastered by Corwin Fox at Hidden Well.

Extra special thanks to Nima Samimi for putting the magic stone in this soup.

Punk Planet wrote, "Chris Sand is our troubadour for the 21st century." Also known as Sandman the Rappin' Cowboy, Sand's music is heavily influenced by cowboy poetry, old-school rap, & d.i.y./punk. Sand has performed with a variety artists such as Michael Franti and Kimya Dawson to name a few. He stars in the 2010 award-winning feature-length documentary Roll Out, Cowboy (www.rolloutcowboy.com). ... more

Bandcamp Daily  your guide to the world of Bandcamp